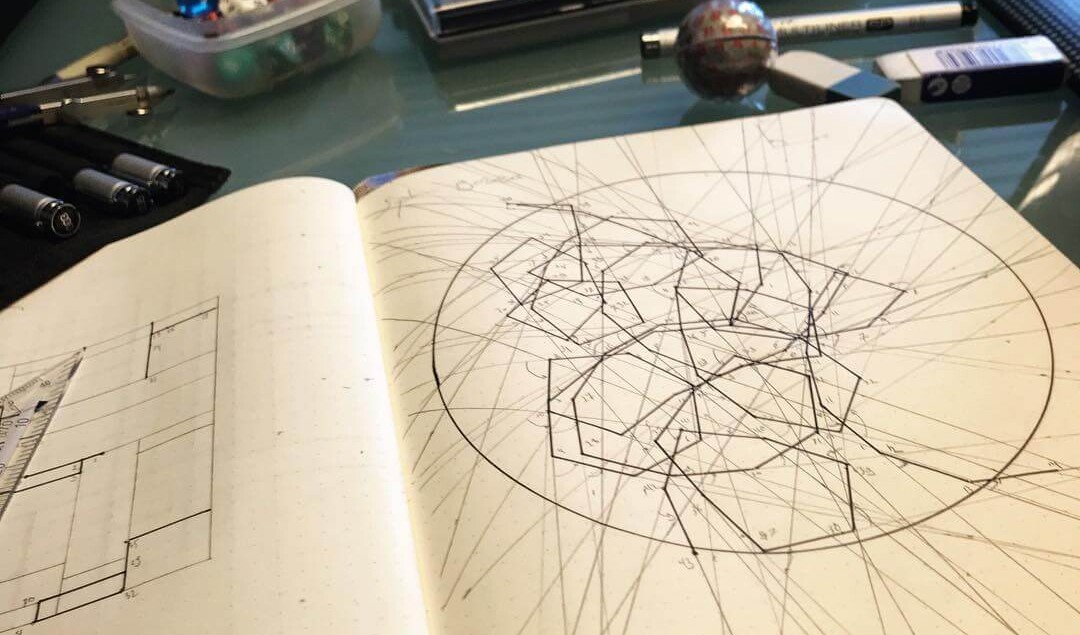 Recently, the kind people of Ohme invited me to give a talk during ]Unframed[, a close up on ArtScience at Les Garages Numériques Festival 2019.

I named my talk “Generation”. Thinking about generative art took me back a couple of years, and as it turns out, I wrote a piece with the same name in 2013. I still agree with its sentiments. This is an update of that text.

Is there anything to generative art beyond its methodology? Is it a field defined by technique, tool, medium, or is there an underlying foundation, a movement?

I am convinced there is a deeper undercurrent to the superficial wallpaper generators. An undercurrent in the evolution of human society.

A silent revolution of narrative

We have long been a people of stories. Tales on how the world works and perhaps more importantly, how we were supposed to behave. There was no real reason to look any further, the story was both reason and explanation. Things are how they are because that’s how they are. The first stories were all-encompassing. Sky, trees, rocks, water, all were actors in an animistic world where everything interacts.  We, tiny humans, had no direct means of control, so we needed to deal with the multitude of spirits inhabiting our existence. Or rather, we inhabit their world.

The stories were invented and told by us, their perspective uniquely human. The narrative was recognizable and believable. And started to change, reflecting emerging power structures, echoing means of control. Scaled-up exaggerated personae appeared, the Greek big-bearded godly bastards, Norse pranksters, the Christian/Muslim/Jewish let’s-not-go-there… These stories built, reinforced, our society, embedded rules in daily lives, commanded unquestioning respect, gave authority – often to the storyteller. And the spirits evaporated, our narrative worldview firmly centred on ourselves. Everything else inhabiting our world.

But things happened. One by one, our POV biased world views floundered, held up to harsh, impersonal light and found to be faulty. Useful models for daily life, valuable tools of control, but empty of profound truth.

The flat world stretching around us turned out to bend underneath our feet in apparent absurdity. We lost our seat at the centre of creation. Our sun was demoted to a close star. Our glorious Milky Way, just one of many. Cosmologists describe our universe itself as only a bit of froth in a seething multiverse. Not content with tearing down our surroundings, we also target ourselves. Our mind and soul were seized from the aether and confined in soft, squishy and above all, mortal matter. We reclassified humanity itself as a species, endowed with exceptional potential, yes. But from a biological point-of-view in no way more evolved than the pets we master, the livestock we breed, or the pests we exterminate.

But science, that culprit science, didn’t stop there. The sensible but cold mechanical/chemical static universe of the 19th century was further denied to us. Quantum mechanics ripped determinism from the very (sub)atomic fabric of our existence. But even here at our own scale, where the classical, deterministic picture still holds, we had to relinquish predictability to the gibbering jaws of chaos theory. (Gibbering might seem too graphic, but chaos theory is single-handedly responsible for al those garishly coloured Mandelbrotian horrors inflicted upon the unfortunate non-colourblind.)

Where does that leave us with our stories? For ages, we believed that to understand anything, we only needed to know. To predict the future: study the past, measure the present… Establish rules and control the system. And we seem very resistant to letting the stories go. So we kept the stories around. Probably we’re too scared to cast them aside. Perhaps believing, mistakenly, that our society, our laws, our morals are founded on the stories themselves, rather than on the things they were initially meant to allegorize.

But surely, exotic mathematical systems might behave oddly, and philosophers delight in academic discussions of principle, but that has no impact on the real world, has it?

A silent revolution of science

The slow change of thought is most apparent in science. Let’s take biology. Long considered a sensible science for sensible moustachioed men, great minds cataloguing species and recording behaviour. They enjoyed invigorating rivalries whether skeletonized specimen A was a rather sizeable pygmy vole or a sickly giant vole. Glass-eyed corpses in the stately natural history museums around the world testify to the enormous efforts of our forefathers. Measuring, labelling, arguing, fixating… growing and pruning the tree of life, a hierarchy of static species.

With Darwin came a revolution of thought, suddenly the tree was no longer a hierarchy but a tracing of common ancestry, portraying relationships between animals. The transformation went deeper than that. The theory suffered/suffers much criticism, mostly born out of misconceptions. But worst of all, a significant point is often overlooked: the fundamental concept of a static species is faulty. In fact, one widely held argument against evolution was that species could not arise from other species. A child can not be another species than its parents, the very thought. Serious scientists tried to defend evolution by reconciling it with discrete species.  Macro-mutations, rabbit and hare springing from a common ancestor in an improbable freak event; or the inheritance of accidental traits picked up during life (a stretched-out neck or a lost tail).

But those efforts missed the point. Evolution runs into problems with our preconceptions. Not because evolution is wrong but because our assumptions are false. There’s no leafy tree of ancestry, each leaf a species. There’s only a continuum, an evergrowing and dividing flow. Each of us a vanishing point, never seen before, never to be repeated.

The human narrative had a clear purpose for distinct species. It was a simplification, a coping mechanism for an incomprehensible complex outside world. And yet, despite the fact that reality defies classification at every turn – just try sorting your kitchen drawers or your book collection – we embraced it, passed it on to our children and that simplification became our surrogate world. And in that surrogate world, people are left out because our labels don’t stick.

So, separated from its origin, the useful story turns against us.

A silent revolution of society

I see a common thread in our history of understanding that goes beyond this growing recognition of the continuum of reality. We are witnessing the steady decline of the static, the “state”, and the accompanying increase of the dynamic, the “process”. Of course, state and process are linked, but the state itself doesn’t tell you the process, and the process doesn’t always allow you to predict the next state. There’s more to understanding than mere cataloguing and observing. Perhaps even more important, there’s more to control than knowing the current state and knowing the rules.

Take our sorry global economy. An artificial construct built on sensible rules, yet somehow it turned into an unstable beast, almost actively resisting interference, as unpredictable as the weather. Or our precious democracy, likewise based on sensible, rational rules, but somehow incapable of giving us sustainable leadership – but very good in producing people whose only talent is to get elected. So what is turning our society into its strange current state: seemingly unstable but at the same time resistant to change. Where does the chaos come from? Surely time and scale are a factor in this. But that can’t be all there is to it – that sounds too much like another human story, ageing, the steady decline of everything.

Allow me another guess: feedback, interaction. “In olden days” events were scrutinized after they happened. Wars, regime changes, trials, political decisions, these have always been news. The news led to reactions. The reactions lead to changes in future behaviour.

But all in all, the report itself didn’t really affect the event. But we have closed the feedback loops all through society. The mere reporting of events, and the reactions, and the reactions on the reactions,… are so fast and all-pervasive that more often than not, the reported incident is being changed. Although quantum randomness doesn’t affect us, we nonetheless managed to turn our reality into a quantum reality, the observation changing the thing observed. This kind of feedback can lead to stabilization but more often than not leads to chaotic behaviour, in a mathematical sense. We still know the rules, but we no longer control the system.

(2021) What’s more, this influence of feedback loops has been noticed., but fundamentally misunderstood. Agencies, organisations, people across the globe are continuously trying to manipulate and steer events, whether to gain likes and followers, to hype a product, to raise money or to topple rivals. We mistakenly believe that we can reliably control the loops, that there are reins to hold. But I’m convinced that very much like an emergency intervention by the World Bank, it’s just temporary prodding. Short-term pushing the system towards a desirable goal, only to realize, again and again, that as time progresses it spins its own way. What emerges is rarely foreseen, and often undesirable.

(2021) When the systems and our goals temporarily align, we deem ourselves masterminds, viral influencers. We celebrate the temporary convergences and attribute them to exceptional genius. We bask in the glory of assumed control, while in the background our efforts are already being washed away in non-linear chaos. It’s a lesson we as a society haven’t learned yet.

Our societal systems, our power structures have their roots in the 19th century clockwork universe, a steady progression of stable moments, tick, tock. The mindset that sees this world as our world, a playground that should play along to our rules. But frustratingly refuses to do so.

Not only a continuum in form, behaviour, space but a continuum in time. Everything interacting, changing, flowing. Full circle, we end up much closer to our animist origins than to the celestial clockwork. Grabbing on to static points, believing this is ours, we tangle up the flows, and our systems turn on us.

So with this world view in mind, what better art form to arise than generative art. The dancing art of rules, of systems, of interactions, of complexity and emergence…